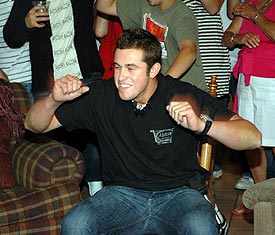 So, I was watching ESPN this morning while preparing my Missourinet sports reports and see where special reporter Chris Connelly is on there with a feature playing off the comparisons of Evan and Eva Longoria.  Been there, done that already!

Back in May, Tampa Bay was in St. Louis for a three game interleague series with the Cardinals.  At the time, everyone didn’t give the Rays a chance in the American League East.  They came into St. Louis in first and after dropping two out of three fell into second place.

At the time, nobody was giving any notice to Evan Longoria though he raised his batting average that weekend from .210 to .231.  I jumped all over the Evan and Eva debate as to who was hotter in a story that first appeared here on May 19th. 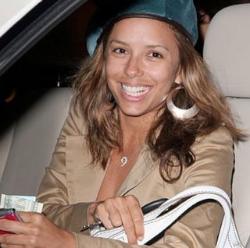 I decided after that weekend that Eva won that round.  She was smoking hot in the season finale and the Rays and Evan were still an unknown commodity.  Now, my mind has changed.

Eva portrays a mom with two kids and never wears makeup on the new episodes of Desperate Housewives and Evan has helped lead the Rays into the World Series.  He finished hitting .272 in the regular season with 27 home runs and 85 RBIs.  Now, he’s got 6 home runs in the post season and has driven in 11 runs in 11 games.