A Democratic state representative is challenging the re-election of Lt. Governor Peter Kinder by criticizing Kinder for not opposing cuts to Medicaid. 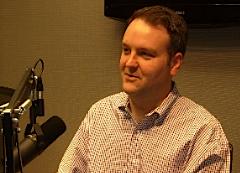 Rep. Sam Page , a Democrat from Creve Coeur, is a medical doctor running for Lt. Governor to be an advocate for senior citizen health care. In an interview with the Missourinet, Page criticizes Kinder for not denouncing Medicaid cuts pushed through by his fellow Republicans in 2005. Page charges that Kinder, as the official advocate for senior citizens, had an obligation to oppose the cuts.

Page says the Medicaid cuts didn’t really save money, but instead shifted costs, forcing the insured and hospitals to pick up the tab of the uninsured.

The Lt. Governor chairs the Tourism Commission. In that role, Kinder has been a big advocate of the Tour of Missouri professional bicycle race. Page is hesitant to say he would continue such support. He says he will have to review the impact of the event from the inside before making a decision about whether he would support continuing it.

The Lt. Governor also serves on 13 boards and commissions and deals extensively with veterans issues.