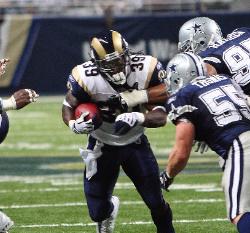 Rams running back Stephen Jackson left Sunday’s game against Dallas in the fourth quarter with a right leg injury.  A MRI revealed nothing more than a quad muscle strain and the Rams are hopeful he’ll make the trip to New England.

If Jackson is unable to go, the Rams would rely on Travis Minor as their featured back.  It’s important all hands are on deck for this tough road test against the Patriots.

The Rams are 2-0 under interim head coach Jim Haslett.