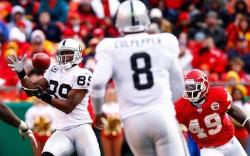 This is something that should have been done before  the flight to New England and before Brodie Croyle got injured.  Now, the Chiefs may bring Duante Culpepper into camp.

What’s frustrating in this whole season is that it took the Chiefs only a few set of downs to realize Tyler Thigpen is not an NFL quarterback.  They couldn’t figure that out in training camp?  They didn’t realize that the aging veteran Damon Huard (who Herm Edwards had already stated wasn’t the answer at quarterback) was not going to rebound?

After the Big Tuna let him go in Miami, Culpepper should have been a guy they Chiefs brought in right away.  If not during training then absolutely after Croyle got hurt in New England.  It would have given Culpepper time to learn the offense and get his timing down.  Instead, if the Chiefs bring him in, it will be a difficult task to bring him up to speed all the while the season slowly slips away.

Instead of being proactive, the Chiefs continue to be reactive this season to adversity.

The Chiefs are also considering Bruce Gradkowski.  He played in Tampa last year and battled Brock Berlin for the third string QB spot in St. Louis.