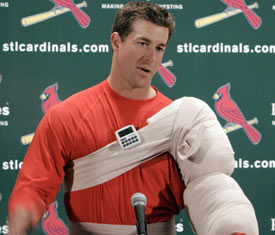 Held back by shoulder injuries over the last two season, left handed starter Mark Mulder was told by the The St. Louis Cardinals that they will not pick up his option for the 2009 season.

Mulder went 103-60 career record in 205 appearances for the Cardinals and Oakland A’s.  The Cardinals picked him up in a trade that sent Dan Haren, Kiko Calero, and Daric Barton.