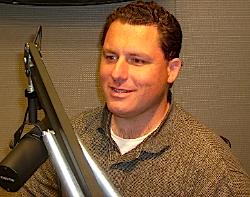 The Republican candidate for Secretary of State, Mitch Hubbard , manages a McDonald’s in Fulton. He said his experiences as a small business owner and as a middle school social studies teacher have prepared him for the role of Secretary of State.

"The Secretary of State is the chief election officer in the state of Missouri," he said. "There is absolutely no room in that office for prejudice, bias, deception or favoritism and my pledge to you and my pledge to all Missourians is when I am elected I will write sufficient and fair ballot language no matter the issue. And that is the reason I am running for Secretary of State is to restore fair elections."

"Right now there is a significant difference between my opponent and myself," he said. "She wants to basically open up elections like the Wild West where voter fraud can run rampant. Now I know that is not her purpose, but that’s exactly is what would happen."

It is not the job of the Secretary of State to encourage voters to register or vote, Hubbard said.

"This is America and people have freedom of choice when it comes to voting," he said. "If they want to vote they can register to vote very simply by going to the county clerk’s office, when they get their driver’s license or if they’re receiving public assistance or if they have disabilities or in a nursing homes those agencies are required by law to help them register to vote. Now if a person chooses not to vote, register to vote, it’s not the state’s responsibility to go out and make them vote."

Hubbard is against same day registration and voting and if elected he wants to increase the number of polling places.  He is in favor of a voter ID law requiring voters to have a state issued ID in order to vote.