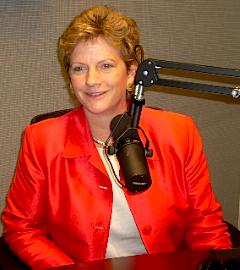 The Democratic candidate for Secretary of State,  Robin Carnahan , has served in that office for the last four years.

The Secretary of State’s office is an opportunity to make a difference in the lives of Missourians, she said.

Since taking office, she said she’s proud of all the times she’s helped people get their money back and the ways she’s saved tax payers and businesses money.

“We’ve saved about $7 million directly for businesses because it’s cheaper for them to file online, so that’s a terrific thing, but there are more things we need to do, but it takes legislation,” Carnahan said. “One of the things I want to do is to cut red tape even more by having these registrations only have to happen every two years.”

Most people associate the Secretary of State’s office with elections, but she said that division is only a small part of the job.

“We’ve got about 270 employees in the office, a $45 million budget, and of those employees only about 15 or so are in the elections division,” Carnahan said. “An awful lot of what we do is not elections in the secretary of state’s office. People do associate the office with elections and that’s because we’re called the chief elections officials in the state, but in fact elections are locally run.”

If re-elected, she said, she wants to change early voting laws to make it easier for Missourians to vote early. She also said she wants to have more ability to crack down on those who scam Missourians.