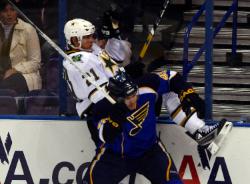 The Blues defense came up big supplying more than enough offense as St. Louis opens up a seven game homestand with a 6-1 win.  The Blues are now 3-1 in the first four games this season.

Keith Tkachuk and Brad Boyes are off to great starts getting goals in all four games this year.  Manny Legace is a perfect 3-0 this year after stopping 29 of 30 shots.

The Blues play again Saturday against the Blackhawks who fired head coach Denis Savard and replaced him with former Blues coach Joel Quenneville.