The Democratic Party contender in the 2008 race to succeed Sarah Steelman as State Treasurer is State Representative Clint Zweifel of Florissant. Zweifel thinks there are some big changes that can be made to the office and believes he is the best person to move into the office once Steelman moves out. 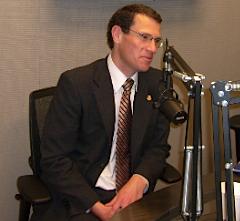 Zweifel, who grew up in St. Louis County, lives in Florissant with his wife and children. His early experiences in public service, which included a stint on the Planning and Zoning Board in Hazelwood, led him to a run for the Legislature six years ago.

Zweifel is proud of his bipartisan work in the General Assembly, particularly with his effort to change how asessments are made on property taxes to keep people in their homes. He has taken a keen interest in education and health care issues, saying they are the major issues we must invest in because they are investments in the people of Missouri.

The Forissant lawmaker says he is very interested in fiscal issues, adding the Treasurer has a responsibility to talk about those issues and to provide some possible solutions to any problems that might arise. His interest in financial matters earned him an MBA, which he says qualifies him for this post.

As for the specifics of how he would run the State Treasurer’s office, Zweifel wants to invest in places in which taxpayers’ money is protected and to reinvest in the state of Missouri wherever possible.

On some of the programs administered by the Treasurer’s office, Zweifel sees room for improvement. One of the programs in which he sees the opportunity to make improvement is with the MOST – Missouri Savings for Tuition program. Zweifel says the program should be divided for Missourians who want to invest on their own and for the rest who want to invest through a broker. He says there are fees associated with brokers, pointing out those who don’t require the services of a broker should not be forced to pay any fees.

One of Zweifel’s big concerns is MOHELA – the Missouri Higher Education Loan Authority. He opposed the sale of MOHELA’s assets, saying Treasurer Steelman could have called for an independent actuarial analysis to make Missourians aware of what a sale would mean for the organization’s financial health as well as for future student borrowers.