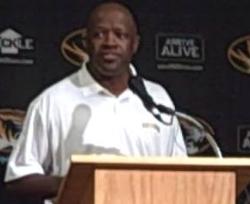 This year’s team is really Mike Anderson’s first true recruiting class and it’s young.  The team features five freshmen and two transfer students, but one thing Anderson noticed during a three day exhibition tournament in Canada is he’s got some depth and some options to use different rotations.

He’s also expecting veteran players like Matt Lawrence, DeMarre Carroll, and Leo Lyons to finally get "it" and buy into his system.  Click to listen to Mike Anderson’s first press conference of the season.