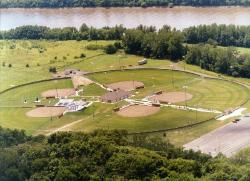 After many years at the Rainbow Complex in Columbia, the MSHSAA State Softball Championships will head to St. Joe in Northwest Missouri for next week’s Final Four in four classes.

The games will take place at Heritage Park Softball Complex .  Semi-final games will be staggered through the day on Friday, October 24 th .  The third place games take place late in the afternoon and evening.

The Class one game will start at 11:00am, followed by Class two at 1:00pm, Class three at 3:00pm, and Class four at 5:00pm.  The championship schedule will rotate in future years.