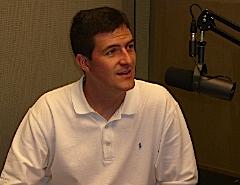 The Republican candidate for State Treasurer did not begin the year thinking he would be running for that office. In fact, State Senator Brad Lager (R-Maryville) only announced his decision at February’s Republican Lincoln Days weekend in Springfield, and it came shortly after current Treasurer Sarah Steelman announced her decision to run for Governor following Matt Blunt’s decision not to seek reelection.

Lager is a small business owner who believes that is the kind of experience required to handle the duties of the State Treasurer. Lager believes his expertise with financial matters will be of great benefit in the office, and says he will be able to bring a business mentality to state government. That means accountability which includes fiscal restraint and responsible stewardship of the people’s money.

That responsible stewardship would be seen through wise investments that would see a greater emphasis on investing in Main Street and not Wall Street. That involves investing more state dollars in Missouri banks and following in the Steelman initiative to avoid putting money into countries that engage in or sponsor terrorism.

Lager does see an opportunity for changes to the Big Missouri Linked Deposit Program which provides low interest loans to small businesses. He says the process has become too cumbersome and burdensome and, therefore, is not being used to its maximum potential. Lager says with lower interest rates things have gotten to the point that banks don’t want to be bothered with the trouble of being involved in the program.

As for MOST – the Missouri Savings for Tuition program – Lager says this is one of the finest programs that exists, but that does not mean there is no room for improvement. He believes it is important for families to contribute some money to their children’s education, with the savings invested in MOST adding up over the years.

Lager says the office of State Treasurer must keep the office non-partisan and must remember the most important thing for the person in that position is to work hard to ensure that Missourians’ tax dollars are invested wisely.