This presidential election just might well break on economic issues. The state of the economy was the main topic of conversation when vice presidential candidate Democrat Joe Biden spoke with the Missourinet’s Brent Martin. 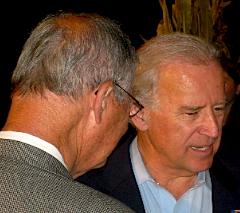 The Obama/Biden campaign gave us six minutes via cell phone with Senator Joe Biden of Delaware, just enough time to scratch the surface. Biden tells the Missourinet the ticket can win Missouri if it emphasizes the issues every family discusses around the kitchen table; such as jobs, health care and 401(K) retirement plans. Biden lays much of the blame for the current economic crisis at the feet of the Bush Administration, stating that its economic policies have been an abject failure for middle class Americans.

Biden says that Americans, of course, want their president to be a strong Commander in Chief and they worry about Iraq. Still, Biden says the collapse of the nation’s financial markets and the free fall of the Dow Industrials on Wall Street the past two weeks have made concern about the economy the number one issue in the campaign.

The first step a new administration must take, according to Biden, is to make sure the $700 billion package works. Biden says it will take time to turn things around. The Treasury Department will need to exercise the authority it has been given by Congress and be bolder in its approach.

Biden says an Obama Administration will also push for a stimulus package:  $25 billion directly to cities and states and another $25 billion to rebuild infrastructure:  roads, bridges, sewers and such.  In addition, the team wants to invest in alternative forms of energy.

The Obama/Biden campaign has been placing more emphasis on Missouri since polls show the race has tightened in the state. Biden visited four Missouri cities in two days:  St. Joseph, Liberty, Jefferson City and Springfield.