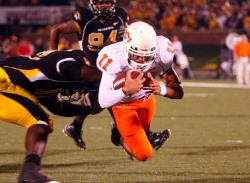 The Missouri Tigers’ hopes of a perfect season were dashed and the team’s hopes for a national championship might have been dealt a severe blow as Mizzou lost a 28-23 heartbreaker to the Oklahoma State Cowboys before 68,349 jammed into Faurot Field.

The Cowboys won the coin toss, deferred to the 2nd half, and Mizzou promptly offered a big thank you to its guests by engineering game-opening scoring drive. But it wasn’t a major that Missouri fans have become accustomed to seeing on the team’s opening drives. Mizzou was stopped at the 1 yard line and settled for an 18-yard Jeff Wolfert field goal to end an 11 play, 83 yard drive. Missouri 3, Oklahoma State 0.

The unthinkable then happened as the Tigers fell behind thanks to a a 13 play, 71 yard Oklahoma State scoring drive capped by a 6 yard TD run by Zac Robinson. Dan Bailey’s extra point made it Oklahoma State 7, Missouri 3.

Lo and behold, the unthinkable happened a second time as the Tigers went 3 and out and punted the ball to the Cowboys. Unthinkable? You bet. It marked the first time this season the Tigers have had to punt without making a first down.

The 1st quarter ended with OSU leading 7-3 and knocking on the door.

But the Cowboys failed to score from the red zone as a Dan Bailey field goal attempt missed the mark and Mizzou took over at its own 20.

After trading possession, Mizzou got the ball on the OSU 36 when the Cowboys failed to pick up a first down on a fourth down fake punt. And, Missouri took advantage of its opportunity, scoring a touchdown on 5 yard Derrick Washington run to cap a 5 play, 36 yard drive – Washington’s 11th TD of the season. Wolfert’s extra point made it Mizzou 10, OSU 7.

The unthinkable then happened for a third time in the 1st half as a Jeff Wolfert field goal attempt failed. It was a 34 yard attempt that was blocked by Orie Lemon. The score remained Mizzou 10, OSU 7 with 2:54 to play.

Oklahoma State threatened as the half came to a close, but Stryker Sulak forced a Zac Robinson fumble which was scooped up by Jamie Blatnick, giving Missouri possession with 6 ticks of the clock remaining. The Tigers failed to score, but led 10-7 as the teams went to their locker rooms at the half.

The Cowboys got the ball to start the 2nd half and rolled down the field for a touchdown in just 50 seconds as Kendal Hunter capped a 2 play, 72 yard drive with a 68 yard TD run. Bailey’s extra point made it OSU 14, Missouri 10.

The Tigers’ next possession was another 3 and out as the Oklahoma State defense held firm.

Mizzou got another kick at the can as Castine Bridges picked off a Zac Robinson pass to give the Tigers the ball. But the happiness was short lived as a Chase Daniel pass intended for Danario Alexander bounced off the wide receiver and was snagged out of the air by Ricky Price, giving Oklahoma State the ball.

The Tigers got the ball back and took it in for a touchdown as Jimmy Jackson took it in from the 1 yard line to cap a 11 play, 95 yard scoring drive. Wolfert’s PAT made it Missouri 17, OSU 14.

But Oklahoma State got the ball back and scored a major in just 4 plays as Robinson tossed a 40 yard TD pass to Damian Davis. Bailey’s extra point gave the Cowboys the lead 21-17.

A fumble recovery by Carl Gettis at midfield gave the Tigers an opportunity, but it was wiped out when Andre Sexton picked off a Chase Daniel pass and returned it to the Missouri side of the field. The Cowboys took advantage of that turnover as Zac Robinson drove his team 29 yards in 3 plays, ending a scoring drive with a 31 yard TD pass to Damian Davis. Bailey’s extra point made it OSU 28, Missouri 17.

But it wasn’t over yet. Chase Daniel was the Chase Daniel of old – last week, old – as he drove the Tigers down the field fo a touchdown. The 7 yard TD pass to Danario Alexander capped a 9 play, 84 yard drive. A two-point conversion attempt failed and OSU led Mizzou 28-23 with 4:27 to go. 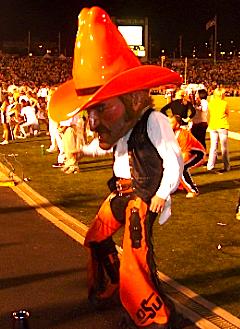 Mizzou has one last crack at the win, getting the ball with 2:40 to go, but Patrick Levine picked off a Chase Daniel pass at the OSU 31 yard line, allowing the Cowboys to run down the clock to 6 seconds before punting the ball away to end the contest and preserve the victory and send most of fans home disappointed.

Chase Daniel, wearing the honorary #25 jersey in honor of Aaron O’Neal, had a disappointing game, completing 39 of 52 passes for 390 yards, but he was picked off 3 times and was sacked twice. And Mizzou did very little on the ground, picking up only 64 yards rushing. On the positive side, Chase Coffman had a career high 11 receptions, his longest for 21 yards.

Things don’t get any easier for the Tigers as they head to Austin for a huge test next Saturday against the Texas Longhorns.