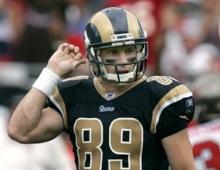 Rams’ wide receiver Dane Looker will have an angiogram today to look further into the possibility that he may have a brain aneurysm .  Looker suffered a concussion against Buffalo and something showed up on his MRI.

Rams’ team doctor Matt Matava said that Looker doesn’t have any symptoms or any prior history with a problem, but what the doctor termed as an "abnormality" showed up on Looker’s MRI that was taken after the Rams September 28th game against the Bills.

Looker will be held out of this weekend’s game at Washington.  Eddie Kennison was re-signed on Tuesday to take Looker’s place.

Previous Post: « Not over the line, says Montee
Next Post: Make your Friday plans in KC or STL »