Vice presidential candidate, Democrat Joe Biden is stumping Missouri, hitting hard cities outside of the major metropolitan areas. Biden, a US Senator from Delaware, stopped first in St. Joseph, and then traveled to Liberty. He ended the day in Jefferson City. 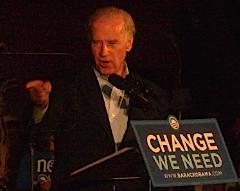 Harshly critical of Republican John McCain , Biden talked up the Democratic prescription for an ailing economy. He said an Obama/Biden Administration would concentrate on creating jobs for the middle class and ending tax breaks for companies moving jobs overseas. Biden countered a criticism Republicans have leveled at him, saying they have taken a statement he said out of context, that paying taxes is patriotic. Biden countered by saying he believes that companies that profit from tax breaks and move production overseas are being unpatriotic.

Biden said Barack Obama is determined to end the nation’s dependence on foreign oil. He compared Obama’s promise to end that dependency in ten years to John F. Kennedy’s famous promise to land men on the moon in ten years. Biden said that lofty goals are needed to bring about real change.

Biden made light of McCain’s suggestion during the presidential debate in Nashville that the federal government should launch a $300 billion effort to buy up the mortgages of Americans who can no longer make their monthly payments. Biden said Congress had already authorized the Treasury Department to access $700 billion to purchase assets weakened by the sub prime meltdown in an effort to jump start credit markets. He asserted that McCain’s plan would only help the banks at a steep cost to taxpayers.

McCain’s plan was cast in a harsh light by Biden, who claimed that McCain came up with the plan on the spur of the moment, because he lacks new ideas. Biden stated that McCain had gone negative to distract voters from real issues and because he has run out of ideas. Biden also kept up the theme both he and Obama have hit the entire campaign; that electing McCain would simply continue the presidency of George W. Bush.