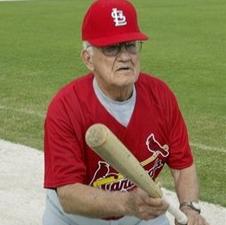 Joe Torre once said "I learned more baseball from George Kissell than from anyone else in my life," George Kissel, died at the age of 88 after suffering injuries in a car accident in Florida.

Kissel had been with the Cardinals for 69 years.  He’s known to generations of Cardinal players as the professor. He’s credited with converting Joe Torre from a catcher to third basemen.    Kissel would make Torre stand and face the outfield wall at arm’s length and Kissel would stand behind him and throw baseballs off the wall to work on Torre’s reflexes for playing third base.

Kissel was inducted into the Missouri Sports Hall of Fame in 2003.  For more on Kissel, you can read the article from the St. Louis Post-Dispatch.

Torre’s Dodgers open play Thursday against the Philadelphia Phillies in the NLCS.