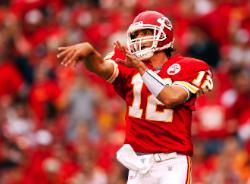 Brodie Croyle, who got knocked out of the first game of the season at New England with a separated shoulder will get his next start on October 19th after the bye week when the Chiefs host Tennessee.

The Chiefs are 1-4 and with the exception of Larry Johnson’s 198 yard rushing performance against Denver, the offense has looked pathetic with Damon Huard and/or Tyler Thigpen taking the snaps.

This could be Croyle’s last go-round with the Chiefs.  Head coach Herm Edwards said Croyle will start the rest of the season as long as he remains healthy.  While Edwards says it’s unfair to place all of the responsibility on the quarterback, I think it has to be.

How can the Chiefs expect to have any success on offense if all they have is Larry Johnson and a running game?

The running game only works if there is some type of passing game to keep the defense off balance.  We saw Carolina key on LJ and they held him to two yards and then when the Chiefs needed to pass Huard couldn’t get the job done.

Croyle needs to be evaluated on his ability to make throws to open up the running game.  Plain and simple.  If he can do that and the Chiefs can win some ballgames the rest of the season, then he’s the guy.  If not, it’s time to look elsewhere.

I’ve said coming into the season, Croyle is not the guy for the job.  He’s often injured and you can look back at his career at Alabama to know that.  He’s 0-7 as a starter and hasn’t had enough snaps or durability to see if he can handle the job.  However, as bad as I think he is, he looks like a much better option than Huard or Thigpen.