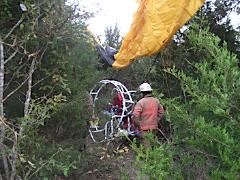 The pilot only suffered minor injuries when the craft went down near his home, said Sheriff Jimmie Russell.

Responders gained access to the crash site off Highway 76 and were able to remove the pilot, Hubert Barnes, from the wreckage and transport him for treatment, he said.

Barnes was the only person aboard. Authorities said he told them the parachute on his ultra light did not lock in and he thought he had too much weight on board causing him to crash.

He’s being treated at Skaggs Community Health Center. The Missouri Highway Patrol is now in charge of the investigation.