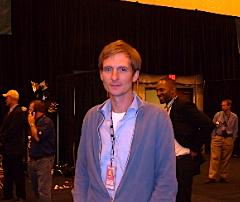 More than three-thousand journalists requested credentials for the vice presidential debate that was staged at Washington University in St. Louis. And, many of those reporters who descended on St. Louis didn’t just come from other cities and states in the United States – many of them came from outside the country.

Michael Vos, an Amsterdam native who is now based in New York, covers American politics for Dutch News Radio and Television. Vos says the Dutch and Europeans, in general, are fascinated with presidential politics here in the United States – even the race for the number two spot on the ticket.

Vos says Europeans pay much more attention to the players and the process than they do the issues. He says they are also fascinated with the length of American presidential campaigns and the amount of money required to run those campaigns.