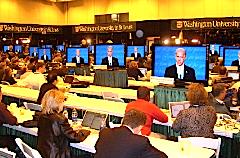 It was a vice presidential debate that might have eclipsed the presidential face-offs because of the interest generated by one of the candidates – Republican Sarah Palin, the Governor of Alaska. Palin and Democrat Joe Biden of Delaware went at it toe to toe for 90 minutes, exchanging views and comments on such topics as the economy, the war in Iraq, national security, health care, and energy policy.

According to the dozens of spinners, who met with reporters following the debate, both candidates performed well in their presentations. But Democrats expressed confidence that Biden won the debate, while Republicans had no doubt Palin carried the day.

Heading into the debate, several Republicans had stated – some openly and others off the record – that they were concerned about the pressure being brought to bear on the Alaska Governor following what might be considered some less than positive reviews on the heels of a couple of national television interviews. Some of those Republican spinners made it clear, following the debate, that they were pleased with Palin’s performance. Some suggested she gave the Republicans a shot they would need.

Democrat spinners acknowledged Palin had a good night, but insisted Biden had done a better job of answering the questions and helping the Barack Obama candidacy.