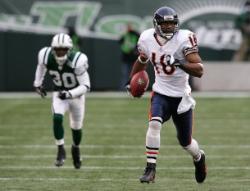 The Chiefs listed offensive tackle Branden Albert as out for Sunday’s game against the Panthers in Charlotte on their injury report. Albert, didn’t practice after dislocating his elbow in last week’s win against Denver.  Herb Taylor will instead start at left tackle.

The Chiefs signed former Bears’ wide receiver Mark Bradley who was cut last month.  Bradley is a former OU Sooner.  The guy has some talent, but didn’t get a chance to show off his skills in a run oriented offense at Chicago.  Not sure what he’ll do with the Chiefs either in their run preference offense.

Derrick Johnson was selected AFC defensive player of the week after Sunday’s 33-19 win over Denver.  Johnson had seven tackles, an interception, a half-sack and caused a fumble.  No Chiefs linebacker had been named player of the week since Mike Maslowski in 2002