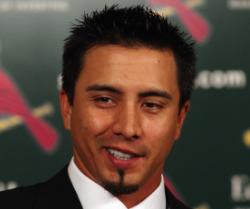 The Cardinals shored up their pitching rotation for the 2009 season by signing pitcher Kyle Lohse to a four year contract worth $41 million, following a surprise 2008 season for Lohse.

I say surprise, because I’m sure not many Cardinal fans expected the results from Lohse who was signed late in spring training.  Lohse went 15-6 with a 3.78 ERA, 119 strikeouts and 49 walks over exactly 200 innings.

However, pitching coach Dave Duncan really liked Lohse right from the beginning when his agent Scott Boras brought Lohse by for a look at him pitching off the mound.

The experts felt the Cardinals didn’t have the starting pitching.  After Wainwright and Looper, there was Todd Wellemeyer and Joel Pineiro (who had arm fatigue late in spring training) and after that not many answers before Lohse arrived.

Chris Carpenter was going to be out until early June (which was very optimistic) and the same was said for Mark Mulder (who never really made it back) so Lohse was truly a bright spot for this team.  Had Lohse not pitched the way he did, this team wouldn’t have been around by August.  Lohse could win the MVP of this pitching staff.

For his innings and winning record, Lohse has been awarded.  Now if the Cardinals can just address those bullpen issues…

Previous Post: « Bond "really disappointed" in House rejection of rescue plan
Next Post: Haslett has a lot to fix as Rams’ new coach »