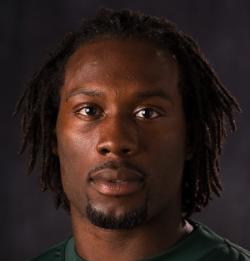 Northwest Missouri State junior running back LaRon Council has been named MIAA Offensive Player of the Week for the period ended Sept. 28. It’s the second time in three weeks Council has earned the award.

Council rushed for 130 yards and scored two touchdowns in Northwest’s 42-0 drubbing of No. 5 Nebraska-Omaha Saturday in Omaha. It’s the third-most yards gained on the ground by Council during his collegiate career and the third time he’s surpassed the century mark this season.

Council scored on a 16-yard screen pass in the first half and on a 5-yard carry in the fourth quarter. He had two receptions for 22 yards in the game and finished with 152 all-purpose yards.

Council is the nation’s leading scorer with 13 touchdowns this season and the second-leading rusher in the MIAA at 105 yards per game.

Previous Post: « Haslett has a lot to fix as Rams’ new coach
Next Post: Tigers guarded against upset »