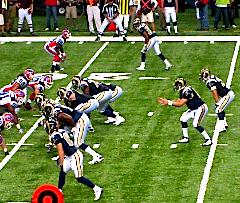 It can be argued the St. Louis Rams played their best game of the year under the Dome, Sunday, against the Buffalo Bills. But it is a fact their best wasn’t good enough as the Bills took advantage of their opportunities to come from behind to beat the Rams 31-14. The Rams are now 0-4 on the season.

The Rams took possession of the ball to start the game, with Trent Green seeing his first action of the season, starting at quarterback. The QB change didn’t help much in the early going as the Rams were 3 and out.

On their first set of downs the Bills drove down the field, settling for a 45 yard Rian Lindell field goal to go up 3-0. Buffalo completed its 54 yard scoring drive in 5 plays.

St. Louis came storming back, scoring a touchdown to give the Rams their first lead of the season on their first 1st quarter points of the season. It was a Donnie Avery 37 yard TD run to cap a 5 play, 67 yard drive. Josh Brown’s extra point made it Rams 7, Bills 3.

Lindell booted his second field goal of the day on the Bills – a 25 yard kick to wrap up a 9 play, 12 yard scoring drive, making the score St. Louis 7, Buffalo 6.

Less than 2 minutes into the 2nd quarter the Rams increased their lead to 14-6 as Steven Jackson galloped into the end zone from 29 yards out to cap a 9 play, 89 yard scoring drive. Brown connected on the extra point.

Once the Rams had taken the 14-6 lead, the defense stepped up. Part of that effort was an interception by Oshiomogho Atogwe with just over 2 minutes to play in the 1st half. The teams went to the locker rooms with the Rams leading by 8.

Buffalo came to within a point on its first set of downs in the 3rd quarter. Fred Jackson scored on a 23 yard TD run to cap a 9 play, 76 yard drive. Buffalo went for 2 points and the tie and made it, but the play was negated by a penalty. The Bills settled for a Lindell extra point to make the score St. Louis 14, Buffalo 13.

The Rams threatened later in the 3rd quarter, attempting a field goal, but Josh Brown’s 51 yard effort missed the mark and the Rams held onto their slim lead. The quarter ended with the Rams holding onto their 14-13 lead.

Buffalo stole the lead from the Rams, just 12 seconds into the 4th quarter as Jabari Greer snagged a Trent Green pass and ran it back 33 yards for the major. Lindell’s PAT made it Bills 20, Rams 14.

The Bills picked up some insurance with just over 10 minutes to play as Trent Edwards fired a 39 yard touchdown pass to Lee Evans to complete a 5 play, 81 yard drive. The two connected for the 2-point conversion to make it Buffalo 28, St. Louis 14.

The Bills put the game out of reach with 6:21 to go when Lindell was perfect on a 45 yard field goal attempt that capped a 5 play, 18 yard scoring drive to make the score Buffalo 31, St. Louis 14. And, that’s the way it ended.

Trent Green completed 17 of 32 passes for 236 yards, with an interception. Steven Jackson rushed for 110 yards and a touchdown in 24 attempts.

The Rams now have a bye week before heading to the Nation’s Capital to take on the Washington Redskins on October 12th.