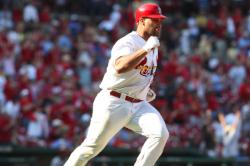 I don’t know if anyone has a clear cut idea of what the criteria is for determining baseball’s MVP awards.  Should it be based on what your team does in the regular season or just along on individual stats?  What about defensive attributes?  What does that do for DHs in the American League?  It is one of those great debates that happens every year, but I think without a doubt, Albert Pujols should be the National League MVP and I’ll explain why.

First, I’ll layout the other two candidates that could be considered.   Chipper Jones of the Atlanta Braves.  Jones is having career numbers; he’s leading the league in batting average at .365 heading into the final weekend, almost 30 points higher than his personal best.  His on-base percentage is a career high at .469 and he has only struck out 61 times in 438 plate appearances.  The downside to Jones.  He’s only played in 125 games and those 438 plate appearance as well below a "full season."

The other candidate who makes a strong case is St. Louis native and former Missouri State Bear Ryan Howard of the Phillies.  His 47 homers and 142 RBIs lead the NL in the two "sexy" categories.  Fans like home runs.  They are the most exciting part of the game and his ability to drive in runs for a playoff team certainly gives him merit.  I look at the downside to him though.  196 strikeouts.  Over the last three years, he’s gone down swinging 576 times or roughly once every three times at bat.  He’s also a defensive liability.

Finally, if you look at Pujols, there is no comparison.  He’s second in the league in batting average at .353 with 77 more plate appearances than Chipper Jones, but you also have to throw in the fact Pujols has 13 more walks than Jones.  Pujols is in the top 5 for home runs (35) and RBIs (112).  He also is third in hits, fifth in doubles, and leading the league in slugging percentage.  If you want to look at teams battling for playoff contention, the Cardinals were two games out of first place back in July 22 nd .  In addition to his offensive categories where he is the only player near the top in several categories, he continues to be a very good defensive first basemen.

As far as MVP numbers, it Pujols without a doubt.  There is precedence for MVPs on losing teams, when Andre Dawson was MVP for the 1987 Cubs who finished in last place that year.

Let me know what you think.  Drop me an e-mail at [email protected]