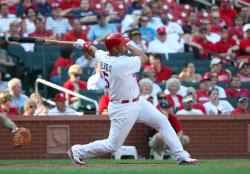 Joel Pineiro won on his 30 th birthday and Albert Pujols’ drove in four runs solidifying his case for NL MVP as the Cardinals eliminated the Arizona Diamondbacks from playoff contention with a 12-3 win.

The Cardinals insist they weren’t concerned about eliminating Arizona more than just playing good baseball and for that, I think you need to credit the team.  They haven’t quite playing and have been playing their best ball this month.

The Cards jumped out again to a first inning lead scoring two in the first inning on a Jason LaRue single.  Adam Dunn homered for Arizona in the 2 nd inning and actually had a 3-2 lead until St. Louis scored twice in the sixth on a sac fly by Pujols and single by Ryan Ludwick.

The big blow came in a five run seventh inning when Pujols hit his 35 th of the year, a three run homer off Yusmeiro Petit.  Then Ludwick went back to back with his 36 th .

Pineiro will finish the season 7-7 after going seven innings where he allowed just three hits while striking out seven.  Tony LaRussa talks about Pineiro as the pitcher gives his thoughts on the team and his season.

Previous Post: « Deal or No Deal, but this isn’t a game show
Next Post: Mizzou basketball tickets on sale »