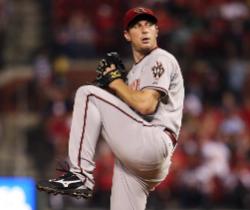 Scherzer allowed the first two runs to score as he threw wildly to first on a sacrifice bunt attempt by Adam Wainwright.  That allowed Josh Phelps and Mark Johnson to score.

Arizona tied the game off Wainwright in the third who would go onto to win his 11 th game of the year, when Wainwright walked Scherzer and gave up a double to Stephen Drew and Chris Young.  The damage could have been worse, but St. Louis traded a run for a double play.

A Cesar Izturis sac fly in the fourth and an Adam Kennedy RBI single in the fifth gave the Cardinals the two run lead they needed for insurance.  The Cardinals now have 82 wins and guarantee themselves a winning season.