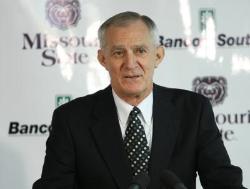 Today, Bill Rowe announced that in June 2009 he will step down as Director of Athletics, a position he has held since 1982. Including his time as a student and then as a coach, Rowe has been associated with Missouri State  University for more than 50 years.

Rowe is currently in his 47th year as part of the University’s athletics staff. He spent 19 years (1963-82) as head baseball coach, athletics business manager and assistant athletics director before becoming the school’s ninth director of athletics in 1982. He will complete his 28th year in that capacity this spring. He is a 1961 graduate of Missouri State, enrolling as an undergraduate in the fall of 1957 after graduating from Marionville (Mo.) High School.

Rowe became Athletics Director as Missouri State was transitioning to NCAA Division I status in 1982. During his tenure, the MSU men’s and women’s intercollegiate teams have made 46 trips to the NCAA championships along with numerous individual NCAA appearances, achieving national recognition almost immediately. Two teams, women’s volleyball and softball, made NCAA Tournament appearances during the school’s first season at the Division I level.