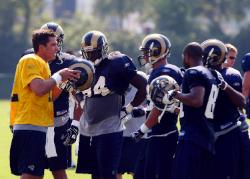 A day after Rams’ head coach Scott Linehan announced that Marc Bulger would be benched in favor of Trent Green, the coach had plans for the defense as well, as Linehan cut Fakhir Brown.

Linehan said that Tye Hill will start in place of Brown.  Linehan didn’t offer more into why he cut Brown other than to say the Rams signed 10 year veteran nickel back Jason Croft and needed to make room.

Brown served a four game suspension last year for violating the NFL substance abuse policy and got hurt early in training camp but won the job from Hill.

As far as Bulger, Linehan said he needed to shake the offense up and the quarterback may take a little more flak than any other position.  Linehan said Bulger was upset, but took the news with professionalism.

Yesterday, the Rams took the field with Green as the number one signal caller.  Green has familiarity with offensive coordinator Al Saunders and Linehan felt Green could provide a spark.