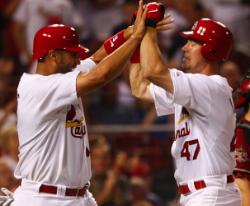 The Mets beat the Cubs last night, officially eliminating the Cardinals from any post-season play for the 2008 season.  On the same night, the Cardinals woke up to beat Randy Johnson and give Kyle Lohse his 15th win in a 7-4 final.

Albert Pujols got the offense started again in the first inning with an RBI single to give the St. Louis an early 1-0 lead.  That lead quickly jumped to 4-0 when Ryan Ludwick connected on his 35th of the year.

Kyle Lohse would get touched for a two run homer by Chris Young in the 4th inning to cut the lead in half, but the Cardinals answered with a run in the bottom of the 5th.  Lohse would give up a solo homer to catcher Miguel Montero and Lohse would exit with the lead after six innings.

Four relievers would hold the fort down with Jason Motte allowing a run in the 8th after the Cards were up 7-3 at that point.  Ryan Franklin picked up his 16th save.  While the Cardinals were knocked out of the playoff run, they did some damage to the D-Backs dropping them three games behind LA in the West.

Tony LaRussa and Ryan Ludwick share their thoughts on the season ending and Lohse talks about getting 15 wins.