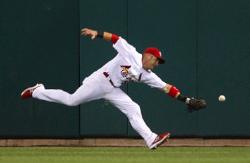 Brandon Webb pitched seven innings and struck out six, but wasn’t dominating as you would expect from a 22 game winner, but he was effective enough to hand the Cardinals a 4-2 loss.

As it has been the case for the Cardinals the last couple weeks of the season, they’ve gotten hits, put runners in scoring position, but just couldn’t get the runs across the plate.

The Cardinals first run came in the bottom of the first on a balk.  The Cardinals out hit the D-backs 11-10 and left 21 runners on base.

Todd Wellemeyer took the loss to drop to 12-9, but once again pitched well enough to keep his team in the game.  He gave up three runs in six innings and struck out seven.  His one big mistake came on a solo homer by Stephen Drew in the sixth.

With the loss, the Cardinals are just one loss or Mets win away from being eliminated from the post-season.  Something Wellemeyer is aware of.  At the same time, Tony LaRussa doesn’t want to blame the offense for all the troubled in September.