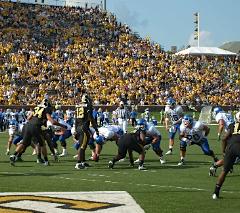 The Missouri Tigers wrap up the non-conference portion of their 2008 schedule with a 42-21 win over the University of Buffalo Bulls, before 65,566 fans Saturday afternoon at Faurot Field in Columbia.

It was a great day on offense for Mizzou quarterback Chase Daniel who completed 36 passes – including a pair of touchdowns – in 43 attempts for 439 yards. But it wasn’t an easy win by any stretch of the imagination as the underdogs from upstate New York played the Tigers tough for most of the contest.

The Tigers wasted little time getting on the scoreboard. After a 3 and out opening offensive series for the Bulls, Missouri began its first series at midfield, and took the ball to the end zone in 6 plays, using up just 1:35, with Derrick Washington taking it in on a 6 yard run for his 7th TD of the season. Jeff Wolfert’s PAT made it Missouri 7, Buffalo 0.

Mizzou’s next possession began on the Tiger 2 yard line. No problem for Chase Daniel as he marched Mizzou downfield for a Jeff Wolfert 16 yard field goal that capped a 13 play, 90 yard drive that ate up 4:35. Missouri led 10-0.

Buffalo got on the board on the Missouri kick off as Ernest Jackson ran it back 97 yards for the major. A.J. Principe’s conversion made the score Missouri 10, Buffalo 7. That’s how the 1st quarter ended with Mizzou driving.

Buffalo held, forcing the Tigers to punt. The Bulls got the ball on their 2 yard line, failed to move the ball significantly, and punted the ball from their end zone – a weak, 16 yard kick that sailed out of bounds at Buffalo 23, giving the Tigers an opportunity to capitalize on a very short field. And, they took advantage of that opportunity.

Missouri needed only 2 plays to hit pay dirt as Jeremy Maclin dove for the endzone to complete a 16 yard touchdown run, capping a 23 yard drive in just :38. Wolfert nailed the extra point to make it Mizzou 17, Buffalo 7.

But the Bulls weren’t about to go away. They took advantage of a roughing the kicker penalty against Mizzou to hold onto the ball and take the ball downfield for a touchdown. Ernest Jackson caught Drew Willey’s 32 yard pass for a TD to cap a 9 play, 80 yard drive in 4:20. Principe’s extra point narrowed the score, making it Missouri 17, Buffalo 14.

Buffalo regained possession with 5:31 remaining in the 1st half as Chase Coffman coughed up the ball. It was scooped up by Anel Montanez, giving Buffalo the ball at its own 38. But the defense held, forcing a punt. But Mizzou was unable to take advantage of good field position as Jared Perry fumbled the ball on the Buffalo 12 yard line with the Tigers poised to score.

It was 3 and out for Buffalo, with Missouri taking over at its own 42 with :23 left in the half. Mizzou used those 23 ticks of the clock wisely, getting into field goal range with :03 left. Jeff Wolfert then connected on a 48 yard kick to put the finishing touches on a 5 play, 28 yard drive and send the teams to the locker room with Missouri up 20-14.

Mizzou got the ball to start the 2nd half and made it count, going 70 yards in 7 plays in 2:43 in a drive that ended with Daniel firing a 27 yard pass to Danario Alexander for his first TD of the season. Wolfert’s conversion made it Missouri 27, Buffalo 14.

The teams then traded turnovers with Tiger defensive lineman Jaron Baston picking up a Willy fumble, and Buffalo defensive back Domonic Cook scooping up a Jeremy Maclin fumble. That recovery led to a Buffalo score as the Bulls drove down the field for a touchdown. Willey tossed a 3 yard pass to Ernest Jackson to complete a 90 yard, 6 play drive in just 2:51, with the Principe extra point making the score Missouri 27, Buffalo 21.

The Tigers failed to score on their next drive as a fourth down pass from Daniel to Maclin was incomplete, giving Buffalo the ball at the Bull 39 yard line. The defense held and the Tigers stormed down the field for a touchdown. Derrick Washington scored his second major of the day on a 4 yard run to cap a 4 play, 87 yard drive in 1:16. Mizzou went for the two-point conversion, which failed, making the score Missouri 33, Buffalo 21. That’s how the 3rd quarter ended.

The 4th quarter saw the Tigers take the ball 82 yards in 8 plays in a 3:24 touchdown drive that ended with Daniel completing a 4 yard TD pass to Chase Coffman in the end zone. Wolfert’s extra point made it Missouri 40, Buffalo 21.

Mizzou picked up another 2 points on an errant snap on a Buffalo punt that led to a safety. Missouri 42, Buffalo 21.

The Bulls threatened on the final drive of the game, getting as close as the Missouri 4 yard line, but failed to add another score.

With his 439 yards in the air, Chase Daniel has set a career high, topping the 421 yard performance against Colorado last year. He also established a Big 12 record when he completed a 9 yard pass to Jeremy Maclin. It was Daniel’s 20th consecutive completion, breaking a record set by Seneca Wallace of Iowa State in 2001 and again by Sam Bradford of Oklahoma in 2007.

The Tigers (4-0) have an off week before heading to Lincoln, Nebraska for the start of Big 12 play and an October 4th match-up with the Nebraska Cornhuskers.