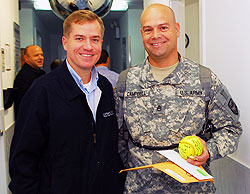 Governor Blunt says he has gone to Kosovo to meet with members of Missouri’s National Guard who are part of the NATO peace-keeping force and say "thanks" to people who are spending more than a year in an intricate and potentially dangerous situation. He says he also wanted to get a sense of their mission.

But says he also reminded the soldiers that they are unofficial ambassadors for the United States in a country that can be an important ally in the fight against terrorism.

Blunt says one of the "funnest" thinks he did during his visit with the troops was present a package to one soldier, Dan Campbell, the softball coach from Jefferson City Helias High School. The package included, among other things, a softball signed by the players on the team and a letter from Campbell’s wife.

About 1,000 Missouri National Guard members are in Kosovo. Their activation was the largest federal callup of Missouri troops since World War One.

Blunt is the Commander in Chief of the Missouri National Guard although he loses that control when the troops are federalized.

On the way home, Blunt plans a stop in Vienna, Austria to try to convince a company "with a presence’ in Missouri to go forward with its expansion plans here. He would not identify the company but did say it is in manufacturing.