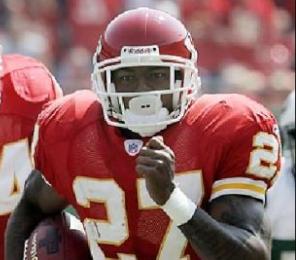 Larry Johnson is disgruntled…again.  Never at a loss for words, the Chiefs running back gave his assessment of his future with the Chiefs saying that he can see the writing on the wall.

Maybe Johnson was frustrated by the fact he only got 12 carries.  Maybe Johnson was venting that the Chiefs used three quarterbacks and couldn’t muster much offense.  Maybe Johnson was upset because while the Raiders were playing under the stress of knowing their head coach Lane Kiffin could be fired at literally any moment by nut job Al Davis, they still managed to manhandle the Chiefs in every aspect of this game.

Whatever his reason, Johnson feels he’s being cut out of the offense as the Chiefs make this youth movement.  Listen to Johnson go on and on about how he needs more than 12 carries a game to get into a rhythm and how he sees his time in Kansas City running out.