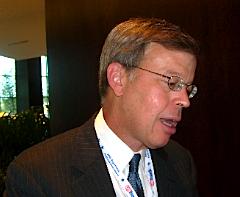 Many of the political pundits believe this is going to be a bad November for Republicans at the ballot box. But former U.S. Senator Jim Talent says that is not necessarily the case – at least in the presidential contest.

Talent, who won a close contest against incumbent Senator Jean Carnahan in 2002, then lost another tight race to now-Senator Claire McCaskill in 2006, believes that while Democrats have an edge this year, Missourians will look carefully at the individual candidates in the presidential contest.

Talent believes his loss two years ago can be attributed, at least in part, to anti-Bush sentiment and people wanting to send a message to the White House. He says with President Bush leaving, that will probably not be the case this year because it will be difficult to link Bush with Republican presidential candidate John McCain.

Previous Post: « Tens of thousands of Missourians remain without power
Next Post: Meet Missouri’s Teacher of the Year »