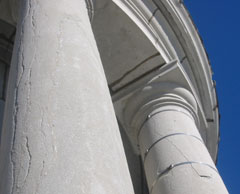 Our official state symbols don’t cost much – a crayfish, a  D ogwood blossom, an ice cream cone…But the biggest symbol of our state, the capitol, has chipped and cracked steps, wiring that’s half a century old, a leaky roof, and even a column ‘way up toward the top, that is being held together with metal bands. It’s paintings by nationally and internationally-famous painters and its statues by famous sculptors need cleaning and in some cases restoration.

The capitol is 90 years old now and the Office of Administration says the building needs 100 million dollars in repairs and renovation. But state budget director Larry Schepker knows this can become a political issue. He says it’s going to be politically difficult to convince lawmakers to spent that kind of money on the building instead of putting it into other programs such as Medicaid and corrections. But he says many of the repairs are needed because they are public safety issues. .

The Division of Facilities management estimates 21-million dollars will be needed to fix steps, terrace walls, and walkways around the building. More than three-million is needed to repair cracks in the building. And 75-million is needed for interior renovation and restoration work–and that doesn’t count four-million dollars in roof work that’s being done, and the planned replacement of the 40 to 60-year old electrical system that could cost another six million dollars. [ Additional photos ]