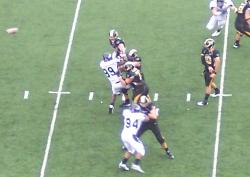 The Missouri Tiger offense was literally unstoppable scoring on every drive, but their last two possessions of the game as the sixth ranked Tigers took care of the Nevada Wolf Pack on a record breaking day winning 69-17.

Mizzou set a record for team passing going for 519 total yards breaking the previous record set by Jeff Haney in 1992 when he threw for 482 yards against Oklahoma State.  As far as Heisman hopeful Chase Daniel, he was 23 of 28 for 405 yards and 4 touchdowns.  Daniel set a team record completing 82.1% of his passes.

Mizzou did not waste much time getting on the board as the Tigers scored on their opening drive going 72 yards in four plays, set up by Derek Washington’s 59 yard touchdown run.  It was the longest regular season rushing touchdown for Mizzou since Brad Smith’s 79 yard run against Nebraska in 2005.

Nevada QB Colin Kaepernick had two great option fakes, one on a 17 yard run, the other on a one yard run that set up Nevada’s first touchdown.  Kaepernick’s 17 yard run was actually ruled a touchdown, but he stepped out of bound at the one.  On the following play, Mizzou covered the back on the fake handoff and the crowd cheered thinking it was a two yard loss, while Kaepernick strolled into the endzone.

Danario Alexander’s first action since the KU game was a carry on a double reverse.  He picked up three yards.  Two plays later, Daniel tried to get Alexander a pass but the ball slipped through Alexander’s hands on a quick slant which led to a 27 yard field goal by Jeff Wolfert putting Mizzou up 17-7 with 2:28 to play in the opening quarter.

After Mizzou’s defense held Nevada to their second three and out of the game, the Tigers took over off a short punt and went down the field in five plays, covering 60 yards to go up 24-7, a minute into the second quarter.

Senior safety William Moore, back after injuring his foot in the Illinois game made his presence felt early coming up with two tackles in the first quarter, but on Nevada’s first drive of the second quarter, Moore slipped while covering a back on a swing pass in the flat and hobbled off the field again favoring his right foot, but returned later in the drive.

The offense didn’t give the defense much rest, as the Tigers took just seven plays and less than two minutes to score as Washington scored his second touchdown of the day and sixth of the season on a two yard run set up by a pass interference penalty in the endzone.

The story for Nevada’s offense in the first half was feast of famine.  They alternated between three and outs and sustained scoring drives.  After Mizzou went up 31-10, the Wolf Pack went three and out giving Daniel one more chance with 2:03 to go in the half and he didn’t waste time.  How about needing 32 seconds topped off with a great tip toe catch by Maclin at the back of the endzone for 14 yards to put Mizzou up 38-10.  FG)

The only problem with running a :30 second offense is it gave the Wolf Pack enough time to score and they did completing a 42 yard pass with 8 seconds left to pull to within 38-17 at the half.

The Wolf Pack continued their scoring drive/three and out flip flops on series, going three and out to start the 2 nd half.  Daniel then took the Tigers down the field again for another touchdown hitting Maclin in perfect stride down the right side for a 49 yard touchdown.  With that touchdown, Maclin becomes the 4 th Tiger to score three touchdowns in one game, the last being Chase Coffman last year at Colorado.

Then the Tigers got into some trickery in the 3 rd quarter.  Facing a 49 yard field goal attempt, Tommy Saunders got the snap, but flipped the ball to tight end Chase Coffman who ran 32 yards untouched for the touchdown, marking the third game this season that Mizzou has scored 52 points.

Chase Patton came in with 5:02 to play in the third.  Nothing changed.  After misfiring on his first pass he drove the team down the field thanks to a pass to Coffman who stiffed armed four Nevada defenders on his way to taking the ball down to the three.  On the next play Patton went in on the keeper to extend the Tiger lead to 42.

The Tiger defense made a statement in the 3 rd quarter limiting Nevada to just two first downs, held Nevada to a three and out and Blaine Gabbert took over at QB after a botched punt gave Missouri a short field to work with a the Nevada 15.  Mizzou came up short on three runs and Jeff Wolfert kicked a short field goal and then adding an interception return for a touchdown by Jeff Gettys.