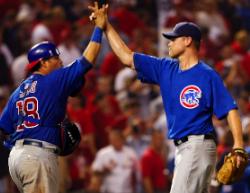 The Cardinals had opportunities to win the three game series with the Cubs, but came up short in Thursday’s final losing 3-2.  Albert Pujols popped up with runners on first and second to end the game.

Pujols had a bit of good and bad in this game.  Pujols’ fielding error in the fifth inning led to two unearned runs, the only runs starter Todd Wellemeyer would give up on the night in his five innings.  However, Pujols did have one hit in the sixth inning to drive in one run and he scored as the Cardinals cut the Cubs lead to one.

For Pujols, it is his 100 th run driven in, just the third player in major league history to drive in 100 or more runs in each of his first eight seasons tying Ted Williams, and trailing only Al Simmons who did it for eleven.

In the eighth, the Cardinals tried to rally, but came up short.  Alfonso Soriano made a diving catch robbing Pujols of a hit and then with runners on first and second, Felipe Lopez flew out deep to right with Kosuke Fukudome making a leaping catch.  After reliever Carlos Marmol walked the bases loaded, Tony LaRussa pinch hit for Jason LaRue with Josh Phelps who struck out to end the threat.  Phelps, now 0 for 4 with four strikeouts against Marmol.

In the ninth, the Cardinals were at it again, but wasted a great chance.  After Brendan Ryan led off the ninth with a double off of Kerry Wood, he overslid third base on a sacrifice bunt attempt and was tagged out.  The Cards would have had a runner on third with one out, but instead kept cracking away and Pujols had the final chance against Wood with runners on first and second, but just missed a good pitch popping up behind second base.

With the loss, the Cardinals remain 4.5 behind Milwaukee while Houston and Philadelphia gain ground to move to three back.

Brendan Ryan, Albert Pujols, and Tony LaRussa comment on dropping the third game of this series