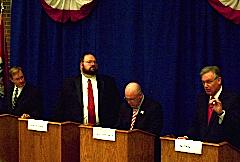 It wasn’t the one on one match-up between Democratic gubernatorial candidate Jay Nixon and Republican flag-bearer Kenny Hulshof that so many Missouri political observers had hoped for. Rather, it was a Missouri Press Association forum in Columbia – an event that also included Andrew Finkenstadt of the Libertarian Party and Constitutional Party hopeful Greg Thompson. Still, it was the first face-off in the 2008 Governor’s race.

The format for the 75 minute forum began with opening statements, then had each of the four candidates answering questions put forward by a panel of journalists. Topics that were touched on included health care, campaign contribution limits, the death penalty, transportation, and education – both K through 12 and post secondary. Two minute closing statements wrapped up the event.

Both Nixon and Hulshof were able to provide some of the differences in each candidate’s plans for dealing with those who are uninsured or are underinsured. Nixon wants to restore the Medicaid cuts of 2005, while Hulshof prefers an alternative proposal he says will address needs while keeping costs in mind.

This was the first of four scheduled gubernatorial debates leading up to the November 4th election. The next is a radio debate scheduled for October 9th in Kansas City.