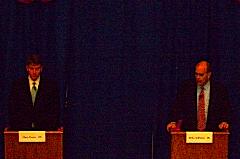 The Democratic and Republican candidates for Attorney General square off in a Missouri Press Association forum in Columbia, covering such topics as dealing with methamphetamine, Internet crime, and the proposal for a reporter’s shield law.

Democrat Chris Koster spoke of his experience making him the best candidate to hold the post, saying he has put in a lot of time dealing with lawbreakers. Republican Mike Gibbons says his experience running the State Senate as Senate Pro-Tem makes him qualified for the job.

On the issue of dealing with meth, both candidates want a greater crackdown. They also want to see steps taken to deal with Internet crime. They differ on the need for a reporter’s shield law, with Gibbons supporting the idea and Koster saying the media should not have special privileges.