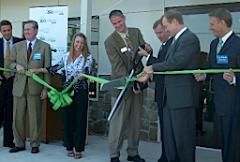 The ribbon has been cut for the new Jefferson City headquarters of the National Biodiesel Board , with those in attendance talking up the importance of biodiesel as an alternative energy source for this country.

National Biodiesel Board CEO Joe Jobe says the amount of biodiesel being produced each year is climbing to new highs. Missouri is home to seven biodiesel plants with the capacity to produce 140-million gallons of biodiesel each year.

Jobe says biodiesel is a growing industry that is supplementing the energy supply, moving toward a billion gallons of fuel – nationally – with hopes of displacing five percent of the nation’s diesel fuel by 2015.