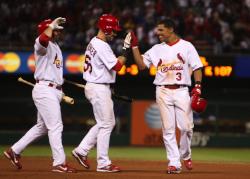 The Cardinals are very much alive in the playoff race.  With Miwaukee’s loss, the Cardinals moved to 3.5 games behind the Brewers for the NL Wild Card lead following Tuesday’s 4-3 win against Chicago.

Cesar Izturis hit an "excuse swing" grounder to Mark DeRosa at second base whose throw home was late as Brendan Ryan slid past Cubs’ catcher Geovany Soto for the game winner.

The 9 th inning heroics were set up by Yadier Molina’s lead off single in the 9 th with Ryan coming in as a pinch runner.  Cubs’ reliever Carlos Marmol balked him over to second.  After a walk, Cards’ rookie Brian Barden (who played on the U.S. Olympic team) laid down a great sacrifice bunt moving Ryan over to third.

The Cardinals finally broke through off Cubs’ starter Ryan Dempster in the bottom of the 6 th inning when Albert Pujols hit a three run homer to right center on the first pitch he saw.  Dempster allowed the first two runners of the inning to get on base as Pujols’ 33 rd homer evened the game after the Cubs jumped on starter Kyle Lohse early.

Derrek Lee and Aramis Ramirez drove in runs with RBI doubles in the first and Ramirez would add another in the third, but the Cubs’ blew opportunities to open the game up, something they’ve been struggling with as they have now lost 8 of their last 9.

Tony LaRussa talks about Pujols and that there is still more work to do and Kyle Lohse and Pujols talk about needing to keep the momentum going.