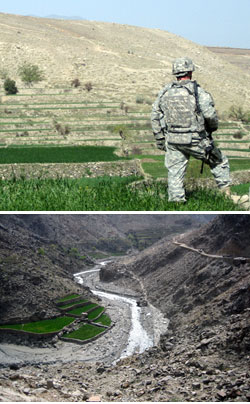 Four dozen Missouri National Guardsmen are in Afghanistan in this 21st century to help advance that country’s agriculture closer to the 20th century.

The Agricultural Development team is partly security forces and partly specialists in agriculture. They’re working in Nangarhar province–the equivalent of a state in the United States. Nangarhar is one-fourth to one-third the size of Missouri.

Staff Sergeant John Wymore of Blue Springs says the unit originally thought the Missourians could teach the people there how to farm. But that changed when the Missourian met the Afghans. "We realized these folks are excellent farmers," he says, "What they need most is infrastructure to store their crops, market their crops, process their crops (and) they need help with livestock."

But he says lack of electricity limits the ability of the farmers to raise food and livestock that must be refrigerated until it can get to market–and that limits the growth of agriculture in Afghanistan.