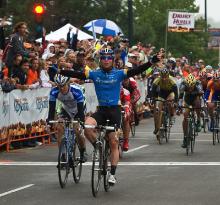 Mark Cavendish of Great Britain is the leader after Stage 1 of the Tour of Missouri that kicked off in St. Joe on Monday and made it’s way through to Kansas City.  The longest stage is set for Tuesday in Clinton.

George Hincapie, who won last year and is Cavendish’s teammate is in 22 nd place.  Tyler Farrar of the United States is in second place said "it’s really cool to see cities getting behind it so quickly. Every time we went through a town, we saw people out on the roads cheering. It looks like the event has a bright future."

The second stage is the longest starting in Clinton and ending in Springfield, 126 miles.  It was at this stage in last year’s race, when one of the cyclist hit an armadillo on the road.  You never know what you’ll run into on our Missouri roads.

Previous Post: « Brady lost for the year from Pollard’s hit
Next Post: Mizzou gearing up for tougher test in Nevada »