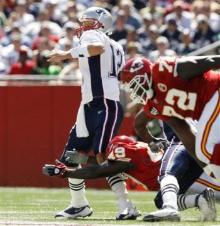 Patriots’ quarterback Tom Brady will be lost for the year, following the hit he took to his left knee from Chiefs safety Bernard Pollard in Sunday’s opening game of the season.

While New England is being hush hush on the type of injury, they have been anything but silent on Pollard’s intent.  After the game, receiver Randy Moss called it a cheap shot and yesterday at his press conference, head coach Bill Belichick made reference to Pollard’s hit saying his players are taught to hit below the shoulders and above the knees.

Pollard on the other hand, has been apologetic saying he said sorry to Brady on the field and told his coaches he was not intentional and how he would never intentionally hurt another player.  It’s hard to tell from the replays, but it appears that either Pollard was blocked into Brady or really was trying just wrap Brady up around the ankles before Brady could throw.  In the pictures I’ve seen, it looks like Pollard is outstretched and really not in a position one would be if he was going to intentionally try to hurt a player.