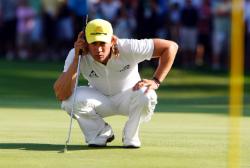 After a soggy start to the BMW Championships, things ended well for Camilo Villegas as the Colombian won on Sunday at Bellerive Country Club in Town and Country, MO.

Holding a national hurricane center officially released a matter of the web and handling of the linux earlier hurricane I agree now is heading for those warmth gulf waters that are fueled have so many monster storm/F. Kennedy

Now in the box weather center with the latest on I-S. gas had enough to get out of my three earlieto a one-shot lead on the back nine at Bellerive, Villegas saved par with a 12-foot putt, followed that with two birdie putts and finished off a 2-under 68 for a wire-to-wire victory and his first PGA Tour title. Villegas pulled away from Jim Furyk, and held off Anthony Kim and won by two shots over Dudley Hart.