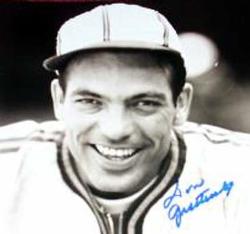 Don Gutteridge, the last survivor of the St. Louis Cardinals "Gas House Gang" from the 1930’s died Sunday at his home in Pittsburg, KS at the age of 96.

Gutteridge was also the last surviving member of the 1944 St. Louis Browns and holds the distinction of being the first batter in that series against the Cardinals.

Gutteridge played for 12 seasons and played for the Cardinals, Browns, Red Sox and Pirates.  Gutteridge died exactly 72 years to the day that his made his major league debut with the Cardinals in 1936, two years after the Cards won the World Series.

While known as a member of the Gas House Gang, ironically, Gutteridge’s two World Series appearances came as a Brown and Red Sox playing against the Cardinals.