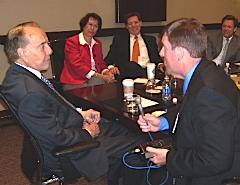 Republican presidential candidate John McCain (R-AZ) is in Missouri on Monday for his first visit to the Show-Me State since formally becoming the party’s nominee a the just-concluded GOP National Convention.

One of the people watching the race closely is former U.S. Senate Majority Leader Bob Dole (R-KS), who represented the Republican Party in the 2006 race for the White House. Dole knows Missouri is an important state that Republicans must win in November if they are to capture the presidency. He believes Senator McCain and running mate Sarah Palin have to spend a good deal of time here. And he says they must talk up ticket’s position on the abortion issue.

Dole praises Palin because of her accomplishments as Mayor and Governor, saying it is degrading to suggest being a woman is one of her only qualities that she would bring to the job.