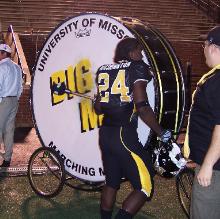 A couple of weeks ago before the start of the football season, I had the opportunity to visit with Southeast Missouri State head coach Tony Samuel who said this was a "money game" for his team and they were overmatched against Mizzou in week two.  To steal a line from Steve Miller, "Go on, take the money and run."

Missouri scored on their first five possessions of the game, and linebacker Sean Weatherspoon became the first Tiger to score touchdowns on interceptions in consecutive games as Mizzou jumped out to a 42-0 first half lead en-route to a 52-3 victory over the Redhawks.

Chase Daniel was 16 of 17 for 245 yards with three touchdowns.  After the Tigers scored their sixth touchdown, Daniel’s day was over.  Patton came in for the Tigers last drive of the first half and completed one pass on a three and out.

It wasn’t as though SEMO couldn’t move the ball.  Ziggy Hood blocked a field goal attempt in the first quarter and then with three seconds to play, the Redhawks missed another attempt as time ran out in the first half.  The Redhawks gained 199 yards of total offense.  Houston Lillard threw for 15 of 33 for 144 yards.  The Redhawks sustained a couple of drives and converted three of nine third down plays, but were unable to cash in once they got in the red zone going 0 for 2 in the first half.

The Redhawks were moving the ball on their first drive of the third quarter, but fumbled.  Patton then led the Tigers into field goal range where Jeff Wolfert hit a 43 yard field goal to make the score 45-0.

Doug Spada broke the shutout with 11:33 to play when he hit a 41 yard field goal after backup quarterback Matt Scheible drove the Redhawks down 56 yards in 12 plays off Missouri’s defensive reserves.

The Tigers came right back on the next drive with De’Vion Moore and Jimmy Jackson ran through the Redhawks defense capped by an 17 yard touchdown run to break 50 points.

Gabbert and Patton will switch off possessions the rest of this season should the score like tonight warrant.  Patton finished the game 7 of 8 for 64 yards.  Gabbert finished 3 of 8 for 27 yards and rattled off a huge 30 yard run, but was caught from behind denying him of a late 4 th quarter score.  Gabbert talks about losing his redshirt and making his college debut.